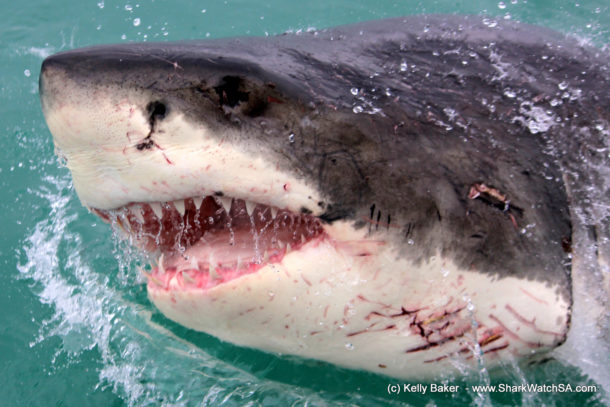 Steamtrain was named in 2009 when she was first observed and was named so due to her sheer size and determined, nonstop behavior. The first sighting recorded of this animal in the area was in 2009 and was in the Joubertsdam, our Summer diving area (please refer to map). Since her first observation was logged she has been seen only around the Joubertsdam’s reef system during our Summer season of September to May. She was logged once a year for the first four years and then only again in 2016. Steamtrain is identified using the trailing edge of her dorsal fin, a unique feature to each White shark, hers is relatively unmarked especially for a shark of such size but with the small notches and bumps we can tell her apart from other sharks. The behavior that Steamtrain exhibits around our shark cage diving vessel, Slashfin, is very active, not always seen in such large sharks. She is seen to circle deep in the water column and then only come to the surface, spending much of her time dominating the waters around the boat with quick approaches and jaws open.

FUN FACT – Steamtrain is one of the largest White sharks that we have seen around the boat in the last few years. She is the epitome of a White shark, large and torpedolike in shape with a darkly coloured dorsal surface and stark white underbelly.

On behalf ofour team at Marine Dynamics Shark Tours we would like to thank you for taking the time to invest in a white sharks future. By becoming a Tier 3 executive adopter you are directly helping us raise much needed funding crucial to achieving research goals enabling us to better protect one 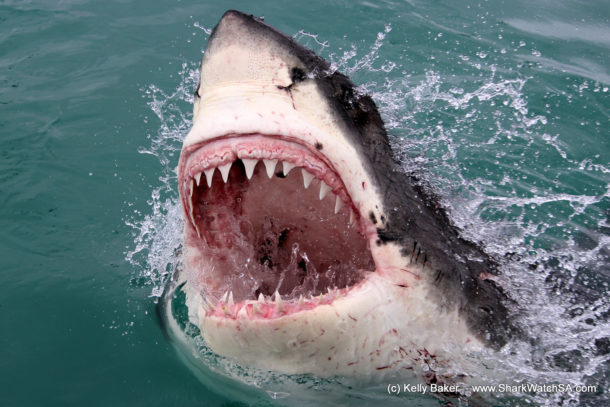 of the oceans most elusive predators, the Great White Shark. We work in direct partnership with The Dyer Island Conservation Trust who are one of only four non profit organisations actively conducting white shark research in South Africa.

Marine research is costly and logistically very challenging. Every piece of equipment placed in the sea must withstand pressure and corrosion. Furthermore, there is a major lack of government resources available for research on sharks in Southern Africa. In order to conserve a migratory animal, critical information on its movement and behavioural ecology are required. Essential habitats such as nurseries and key foraging grounds need to be identified aswell as areas of threat which need to be policed accordingly. 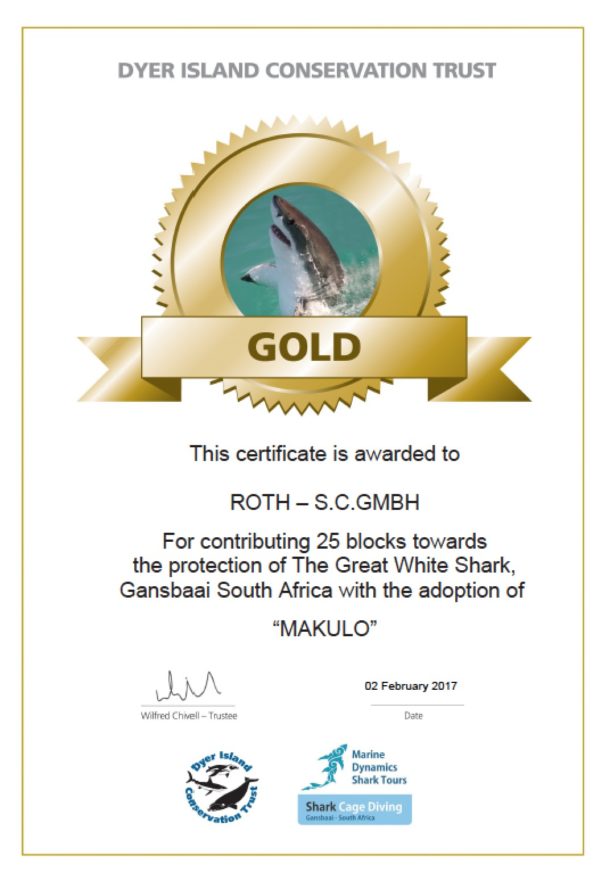 Sadly in SA, white sharks face extensive pressures and suffer high mortality due to illegal fisheries, lethal bather protection nets and village fisheries in Mozambique. The plight of this shark species can actually readily be compared to that of the Black Rhino- although it is much harder to quantify and visualize the extent of manmade damage in the vast ocean environment. There may be only a couple of thousand white sharks left in SA, and we still have no solid evidence of their breeding or mating. Recent research indicates SA has the most genetically fragile stock on the planet which may only reach reproductive maturity at around 20 years old in males and 30 years old in females! Furthermore It seems the sharks migratory trajectories in SA overlap directly with high risk zones for mortality. Often the sharks we see in Gansbaai carry wounds such as severe damage to their fins and bodies from fishing gear.

It is not all doom and gloom however, slowly but surely positive change is happening and people are beginning to realise that these majestic fish are key players in a healthy ocean ecosystem. The savage monster fallacy is outdated and people like you are supporting this movement. By adopting a white shark you are actively helping us facilitate tagging and tracking research which is fundamental to their protection. Attached is your shark adoption form detailing the key information about the white shark you have decided to adopt and provided us a name for.

Marine Dynamics biologists collect daily records on individual white sharks and have the most comprehensive database in Gansbaai spanning over a decade. White sharks migrate thousands of kilometers within a year but usually return back to key foraging sites in different seasons for years. Gansbaai is one of these sites. Some sharks are sighted in Gansbaai for a few days, some a few weeks, but usually not longer than six weeks. The team will be able to summarise when your shark was photographed again and will list this in the end of year report emailed to Tier 3 executive adopters in December. The Dyer Island Conservation Trusts team have over 18 peer reviewed scientific papers we encourage you to visit their website where you can access and download these articles for free at www.dict.org.za.

We use cookies for a number of reasons, such as keeping MAKULO Sites reliable and secure, personalising content and providing social media features and to analyse how our Sites are used. Find out more - Cookie Policy